Ötzi – the man in the ice

1991 will be remembered as a special year in the annals of prehistoric archeology. It was on Thursday, September 19th, at 1:30 pm, on a sunny day, when Erika and Helmut Simon from Nürnberg, Germany, a couple on holidays in the area, took a shortcut on their way down from the Finail summit (Ötztal Alps) close to the Tisenjoch. In a crevice filled with melted water, they discovered a human corpse. Only the scalp, the naked shoulder and part of the back were sticking out of the ice. Enter “Ötzi.”

This discovery was the beginning of a unique archeological investigation which was the first of its kind in the alpine region, and was accompanied by extensive media coverage. Even several years later, the sense of fascination remains high. Many speculations, stories and phantasies are woven around the man in the ice. Many secrets were unraveled, but some will remain hidden forever.

The “Ötzi-village” in Umhausen as well as the Archäopark in the Schnals valley in South Tyrol provide a glimpse into the life, living conditions and economy of the early Stone Age, the time when Ötzi lived, to the visitor. The South Tyrolean museum of Archeology in Bozen displays a comprehensive account of the history of settlement in the area and is now the new “home” of the man in the ice. Additional reading is available in the Archive of the Ötztal Nature Park. 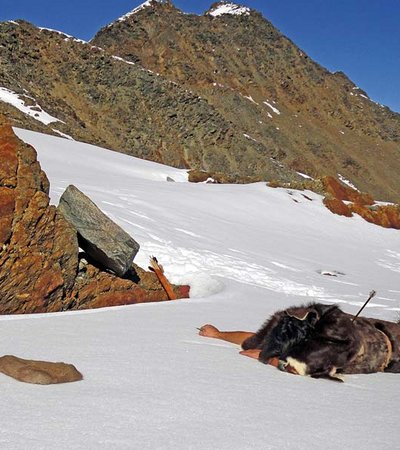